2nd and 3rd seeds both out in Charleston third round 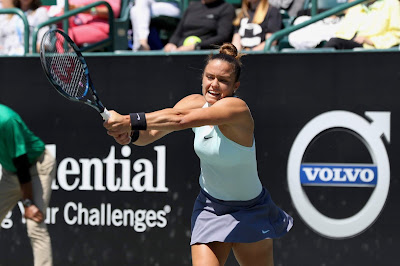 2nd seed and defending champion Kiki Bertens was eliminated from the Volvo Car Open draw today by Maria Sakkari, who defeated Bertens 7-6, 6-3 in a match that lasted almost two hours and which featured an especially exciting first set tiebreak. Bertens went up 5-1 in that tiebreak, only to have Sakkari win three straight points, then eventually bring the score even. Both players had set points, but 8-all proved to be the breaking point for the Greek player, who escaped from the tiebreak with a 10-8 score.

Sakkari, seeded 15th, has a similar game style to Bertens, and their shots and strategies often mirrored each other's. Bertens was able to save only one break point, however. Later, at her press conference, she said that she hadn't felt any pressure about being the defending champion; rather, " it didn't feel like that it was the pressure, more it was like my level was not really there. I'm still a little bit searching for my level, I think, this year."

Aryna Sabalenka, the 3rd seed, fell to Monica Puig, the 2016 Olympic gold medal winner whose career has been strangely quiet since her out-of-nowhere victory in Rio. So remarkable was her 2016 win, in fact, that Puig was named Best Female Athlete of Rio 2016 by the Association of National Olympic Committees Awards.

When she talked with the press, the Puerto Rican player said that she has always been results-oriented and that she is learning to be more process-oriented, and to have patience and allow her progress to unfold.

Puig will next face 11th seed Danielle Collins, who put on something of a hitting clinic in her third round match against Kaia Kanepi. Especially impressive was the first set tiebreak, in which Collins performed what I've been calling Kvitova Theatre, hitting laser-like shots onto the lines and into the farthest corners of the court.

In doubles, the top seeds, Nicole Melichar and Kveta Peschke, were upset by Anna-Lena Friedsam and Sara Sorribes Tormo in the quarterfinals.
Posted by Diane at 8:45 PM