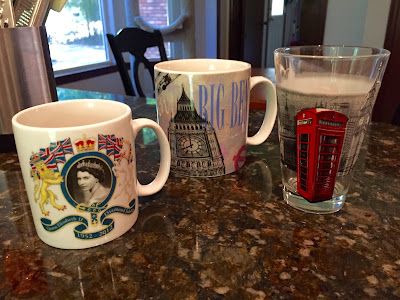 Here, in ascending order, are my top 10 Wimbledon happenings:

10. It took them long enough: Finally, AELTC added a wheelchair singles competition to Wimbledon. And the inaugural winner was Jiske Griffioen, who defeated countrywoman Aniek Van Koot 4-6, 6-0, 7-6. Griffioen now holds four major singles titles, and is a U.S. Open title away from having a Career Slam. Griffioen and Van Koot also competed in the wheelchair doubles final, but were defeated by Yui Kamiji and Brit Jordanne Whiley.

8. Keep calm and rally on: Heather Watson, playing for the first time with Henri Kontinen, won the mixed doubles title, defeating Anna-Lena Groenefeld and Robert Farah 7-6, 6-4. Brit Watson joins Jordanne Whiley and Andy Murray (her 2016 Hopman Cup partner) in leaving Wimbledon with championship trophies. Watson had a very dramatic Wimbledon last year, when she came within a hair of taking Serena Williams out of the competition in the third round. Watson made a first-round exit in singles this year, so winning the mixed doubles title had to feel especially gratifying.

7. Blue tarp blues: Rain appears on this list a lot. There was so much rain this time around that the tradition of not playing on middle Sunday had to be put aside for only the fourth time in Wimbledon history. But even for allowing for an extra day, schedules were jammed, matches were moved, and some matches had to be started over and over for hours on end.

6. The Rock continues to crumble: The Good Petra/Bad Petra show was a brief one, but a dramatic one, also. The two-time Wimbledon champion, if she was ever going to get it together, would have gotten it together on the grass in London, and for one round, it appeared she had done just that. Kvitova looked deadly in her first round match against Sorana Cirstea, but lost in the next round to Ekaterina Makarova. Much of the Barking Czech's second round play was brilliant, but she made too many unforced errors against a very dangerous opponent. This kind of thing is, unfortunately, what we've come to expect.

5. I'll show you "comeback": It was pretty impressive when Elena Vesnina, as a qualifier, reached the final in Charleston this year. But that was nothing compared with her next trick: Vesnina made it all the way to the semifinals at Wimbledon, and along the way, she defeated Andrea Petkovic, Ekaterina Makarova and the on-fire Eastbourne champion, Dominika Cibulkova. She was finally stopped by Serena Williams, but what a run it was! Next week, Vesnina will be ranked number  in the top 25; in January, she had fallen out of the top 120.

4. Audience with the queen: As much as people may have wanted to believe it could happen, it wasn't easy to predict that Venus Williams would reach the semifinals at Wimbledon. The five-time champion, who has had to deal with the challenge of chronic illness for the last several years, has steadily worked her way back up the rankings, and she thrilled spectators with her deep run. From her dramatic defeat of upstart Daria Kasatkina to her wins wins over Carla Suarez Navarro and Yaroslava Shvedova, Venus made it all seem like old times. Angelique Kerber stopped her run, but Venus--with sister Serena--would go on to win the doubles title.

3. Welcome back to Care-a-Lot: Angelique Kerber showed up in London in very fine form. The German with the strong legs romped through the draw without dropping a set--until she reached the final. Kerber--with her amazing defense and stunning transition game--got past both Simona Halep and Venus Williams to stage a repeat performance of the Australian Open final, that is, another last-day meeting with Serena Williams. She played very well against Williams, but lost her nerve at crucial times, and of course, was out-served (though she served quite well throughout). Kerber's career has been filled with inconsistency and injury, and yet she has managed to do what very few do--win a major and appear in a final in another one. Keep watching.

2. The Ninja + The Domi-nator = The Awesome: The finest match of the tournament was played in the round of 16, and it featured--but of course!--Agnieszka Radwanska. At the French Open, Radwanska played an unforgettable match against Barbora Strycova, in which the Czech player actually appeared as a mirror image of the magical Polish shot-maker. This time, Radwanska (seeded 3rd at Wimbledon) didn't get a twin Ninja, but she got all she could possibly handle from the hard-hitting Dominika Cibulkova. Never considered a grass court player, Cibulkova won Eastbourne right before coming to London.

Cibulkova had a very tough draw. To even get to the round of 16, she had to beat Miryana Lucic-Baroni, Daria Gavrilova and 2014 runner-up Genie Bouchard. She and Radwanska played for three hours, and it would be interesting to know how much total distance they covered during that time. There was a lot of running, there were some long and beautiful rallies, some deadly angles, and--of course--some jaw-dropping Radwanska moments. But in the end, it was Cibulkova who walked away the winner, 6-3, 5-7, 9-7.

But the Slovak was spent, and she went out easily in straight sets to Elena Vesnina in the quarterfinals. It made me think of that time in Melbourne when Radwanska played what some called "the best set of tennis ever played by a woman" and beat Vika Azarenka, only to be completely wiped out and lose easily in the next round. The winner of that match? Dominika Cibulkova.

Cibulkova, by the way, didn't really have time to feel bad about the loss; she had to attend her own wedding on Saturday.


1. This is what a champion looks like: Serena Williams came to Wimbledon to win--everything. And win she did. The world number 1 won the singles title--her seventh at Wimbledon--and then, with sister Venus, she won the doubles title (their sixth at Wimbedon). This was Williams' 22nd major singles title, and it came a bit later than the tennis world had expected. Williams failed to reach the final at the 2015 U.S. Open, she lost the Australian Open final to Angelique Kerber, and then lost the French Open final to Garbine Muguruza.

But if ever there were a venue where you figured "this is it," it's Wimbledon. Serena Williams is superb on every surface, but she especially shines on a grass court. She and her sister are Wimbledon institutions at this point.

Serena dropped just one set in the tournament, and that was in the second round, against Christina McHale. She defeated Kerber in straight sets in the final, though they were two extremely well played sets. Wearing an especially chic Nike dress, Serena held the Venus Rosewater Dish with such authority, it looked like it was designed as part of her outfit. Throughout the week, she was poised, philosophical and at ease. She now easily expresses opinions she used to avoid expressing--or perhaps even owning. The aura of a champion is hard to put into words, but you know it when you see it. When you look at Serena, you just know it.
Posted by Diane at 1:50 PM

I felt especially happy for Watson. I don't think I've ever seen anyone play a final with that much joi de vrie!