Wozniak prevails over McHale in Charleston 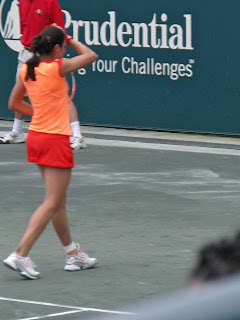 Aleksandra Wozniak served her way into the Family Circle Cup second round today, at the expense of crowd favorite Christina McHale. The two played for over 2 hours and 48 minutes, and Wozniak won 7-5, 5-7, 6-4. Both players had all kinds of problems at the net, which became the depository for several intended smashes. But other than that, it was a high quality affair.

Wozniak looked a bit tired in the third set, and her level of serving decreased, but she turned it on again to come through at the end. There were lots of twists and turns throughout the event, and it really was impossible to predict the winner until the very last ball had been struck. The Canadian star, whose ranking fell considerably because of tendonitis in her forearm, recently held a match point against Venus Williams in Miami.

Another local favorite, Melanie Oudin--after going through two qualifying matches--fell to Anabel Medina Garrigues, 6-4, 4-6, 6-0. Chanelle Scheepers, who usually performs rather well in Charleston, was beaten by qualifier Paula Ormaechea. And a tired-looking Kimiko Date-Krumm was defeated, 6-4, 6-3, by Polona Hercog. Date-Krumm left the court without even being acknowledged by spectators.

Jamie Hampton played Sloane Stephens in the last match of the day. Hampton took the first set 7-5, and then Stephens went up 5-1 in the second. Stephens served for the set at 5-2 and was broken, and she wasn't the same after that. Hampton, constantly moving forward and also utilizing an effective backhand slice, took the set to a tiebreak, which she won easily; Stephens scored only one point. Hampton will play 2010 champion Samantha Stosur in the next round.
Posted by Diane at 10:42 PM