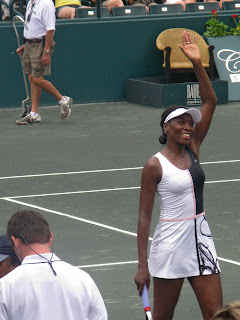 Venus Williams, who is playing as a wild card in Charleston, was tested somewhat today by qualifier Iveta Benesova, but Benesova failed to hold her nerve at crucial times, and Williams advanced 6-4, 6-3 to the second round. The first real problem for Benesova came when she served at 4-5 and double-faulted, giving Williams a set point. Then she faulted again, hit the next ball into the net, and walked to her chair with a somewhat rueful smile on her face.

The Czech player again presented a challenge in the second round, demonstrating her deft touch with the ball. But again, at the business end of the set, Benesova faltered. What also helped Williams was that her service game was superior throughout the match.

Williams will play Jelena Jankovic in the next round. Jankovic beat Williams in a very exciting semifinal in 2007, and then went on to win the championship.
Posted by Diane at 6:06 PM