Stosur advances to 3rd round of Family Circle Cup 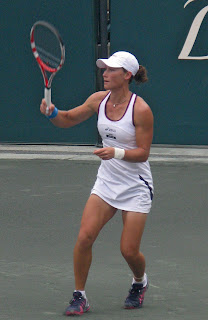 During the first set of today's second round match between 2010 champion Samantha Stosur and qualifier Jamie Hampton, Stosur didn't have to do much except serve and wait patiently. Hampton was obviously nervous, she was rushing her serve, and she helped hand Stosur a 6-0 first set. But, as expected, Hampton returned to the court a different player in the next set. She broke Stosur when the Australian star served for the match at 5-3. Hampton then held on a second serve that went directly to her opponent's body. But at 5-all, Stosur broke again, and won the second set 7-5.

Two-time runner-up Vera Zvonareva also advanced to the third round, with an easy win over Kateryna Bondarenko, and Yanina Wickmayer advanced to the second round by defeating Vania King 6-4, 6-3. And while she struggled with her shoulder problem, Anastasia Pavlyuchenkova defeated Eleni Daniilidou.