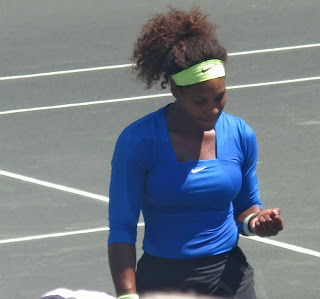 She won the championship at the 35th anniversary of the Family Circle Cup, and yesteday, Serena Wiilliams won the championship at the 40th anniversary. The 2012 Charleston win is also her 40th  singles title. Williams beat Lucie Safarova 6-0, 6-1 in less than an hour. She said after the match that "I never realized how well I play here....It's such a nice place to come to, and I don't want to miss out on the banana pudding again."

Lucie Safarova, like Elena Vesnina in 2011, received some compensation for her loss by winning the doubles championship with partner Anastasia Pavlyuchenkova. Pavlyuchenkova and Safarova defeated Anabel Medina Garrigues and Yaroslava Shvedova 5-7, 6-4, 10-6. The wild card team also defeated the tournament's defending champions and the tournament's top seeds on the way to the final.

The doubles final was a well-played, very entertaining affair, and special recognition goes to Pavlyuchenkova, whose down-the-line forehand winners and well-placed volleys did a lot to bring about victory for her team. This was Safarova's first WTA doubles title.

did the women's empowerment theme help the women to have more camaraderie...the players just seemed to be enjoying themselves and each other more so than usual...

i guess i'm thinking of the tense handshakes at the net after games that i normally see at events...and perhaps that's just because besides serena, the other divas weren't in town...and sam stosur and safarova seem like nice ppl in general.

and seriously, when serena plays and *acts* like that...who wouldn't like her. i wish she would do more of that more often.

did you get a chance to talk with her? i kind of really want to go to the event now :) it seems like a really fun time on tv

It's always fun in Charleston; the players relax and enjoy the restaurants and the fans and the stadium, and the staff takes really good care of them.

I did talk with Serena a little bit. She looked good and was very funny throughout this event. The funniest moment was at the end, when Jackie sneaked into her press conference and had to be taken out in a briefcase!

Does anyone think Serena could win the French Open?

Last week, I said no. Now I'm saying "Why not?" We'll see how things settle after Rome and Madrid. I think things might get shaken up a bit.