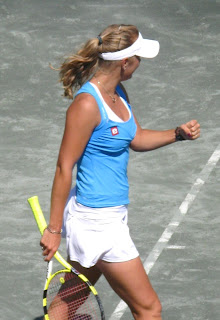 Caroline Wozniacki, playing a high quality match against Virginie Razzano, won the AEGON International today, 7-6, 7-5. Both players served well, and both returned well. Razzano wound up with almost twice as many winners as Wozniacki.

The match also had some unusual drama. Wozniacki was up 6-1 in the first set tiebreak, when Razzano began making point after point. Toward the end of the tiebreak, Wozniacki hit a ball which appeared to be in, but which the chair umpire overruled as out. The point was replayed, and Razzano won it. Justice was served in the end, though, when Wozniacki--serving at 6-5--immediately own the set on her first serve.

In the second set, there was another moment--again toward the end of the set--when Wozniacki thought she had hit a winner and won the championship, only to have her ball called out as she was approaching the net to shake hands with her opponent (reminiscent of what happened to poor Nathalie Dechy last year during the second round of Wimbledon). She and Razzano both had a good laugh, then Razzano proceeded to win the next two points. Wozniacki prevailed in the end, however.
Posted by Diane at 12:42 PM