What does the future hold for Safina? 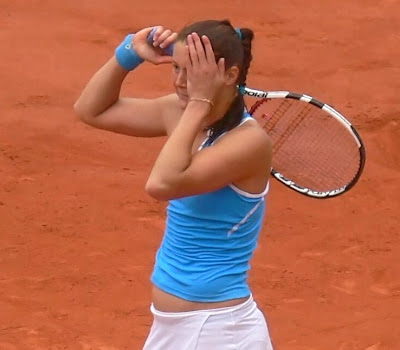 Dinara Safina, after double-faulting at match point in the French Open final
Photo courtesy of Angelica
Dinara Safina is not the first tour player to lose three major finals and therefore be without a major title. Kim Clijsters lost four of them before she finally won the U.S. Open in 2005. However--despite what anyone may say about Clijsters' performances against Capriati and Henin--I think we can all agree that "going to pieces mentally" would not be one of the descriptions. Of course, some people may indeed say that Clijsters went to pieces mentally against Henin, but relatively speaking, whatever she did was not what Safina did yesterday, or what she did in Australia against Serena.

While it's true that Safina doesn't have the clay court movement or the variety of Kuznetsova, or the speed of Serena Williams, she does have considerable talent, and she has the titles to go with it. In the end, it isn't her deficiencies that are keeping her from winning big trophies--it is her mentality.

She kind of fooled us this time around, too. There was very little of that Thrill Ride action going on during the Euoprean clay court season; mostly, Safina was just straight-out winning. But when she got to the biggest match of all, she fell apart. Can this type of mentality be repaired? Yes, but Safina has to be willing to do what it takes to repair it.

A few days ago, Ted Robinson made a groaner of a joke: He said it was appropriate that Safina's coach is named "Cry on." It is even more appropriate as of yesterday. It has crossed my mind that there relationship may have run its course, although I hope that is not the case.

A few days ago, Martina Navratilova suggested that perhaps Safina needed a hypnotherapist, only she incorrectly said "hypnotist." (I suspect Leif Shiras's laughter was over the concept, not the incorrect nomenclautre, but the concept is exactly right.) No, she doesn't need to walk like a chicken, but she could use a good hypnotherapist in the worst way. When someone has that much anxiety and that much ultimate lack of belief, the conscious mind has to be circumvented. Learning to do relaxation exercises and utilizing prepared thought scripts would also help.

A lot of people are trashing Safina right now, and predicting her demise. They could be right--this latest loss could do her in. But it doesn't have to. Dinara needs to continue adding finesse to her game, and she does need to improve her movement. But everything is relative. Lindsay Davenport was the least of the court movers, but she won three majors. Maria Sharapova has her own weaknesses, but she has won three majors. They won because they had enough superior skills to win, and because they believed--really believed--they could. Safina does not believe--yet.
Posted by Diane at 4:11 PM

ASDinara has a bright future. I believe that she got caught up in the whirlwind of good vs evil. When Serena made her comments about being number 1 she upset so many people that they put all of their hopes on Dinara to hopefully shut Serena up. They wanted her to win and win decisively so that the words that Serena said would be proven false. When u beat somebody as bad as Serena beat Dinara in a Grandslam final u will always have an edge against them. As a consequence Serena will always believe she is a superior player than Safina.

Btw, Dinara has said some similar statements as Serena, but has not received any backlash.

She is as good as anyone else out there. She should have won the final and will be gutted by it, but she is good enough to bounce back. I'm not convinced by Kuznetsova - she was very very lucky to win.

When Safina can stand the heat in the kitchen, only then will she have a bright future. Until she starts thinking positive instead of negative their will be no grandslams in her future. She will when regular touraments though but no grandslams. They are her brick wall and she can't break it.