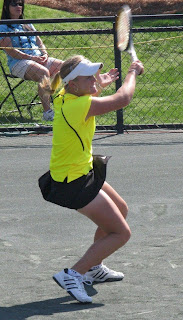 Tomorrow, Melanie Oudin plays her third round match at Wimbledon. She will play former world number 1 Jelena Jankovic, and--given Jankovic's recent form, her declared decrease in motivation, and her preference for non-grass courts--there is talk about an upset. I'm not expecting one, but I won't fall over from shock if one occurs, either.

The former junior world number 2, at 17 years of age, has an intense and no-nonsense persona on the court. I saw her play several times in Charleston this year, and she has a mature game. She is a good returner of serve, has a crisp forehand, and is not afraid to use a variety of shots to outplay her opponent. At the Family Circle Cup, Oudin had to win two qualifying matches to get into the main draw, and she was the last qualifier standing in the third round. She defeated a significantly injured Olga Savchuk in the first round, but then went on to defeat (with one 6-0 set) Aleksandra Wozniak in the second. Marion Bartoli overwhelmed her in the third round, but Oudin nevertheless played well.

At Wimbledon, Oudin upset 29th seed Sybille Bammer in the first round, then upset Yaroslava Shvedova in the second round. The five-foot, six-inch American considers herself a clay player, and has told the press that she is suprised to see herself in the third round of Wimbledon.
Posted by Diane at 3:00 PM

Oudin will win in three sets.