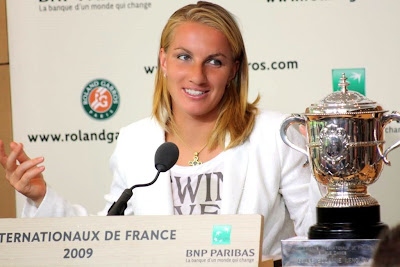 "I'm still in some of the shadow yet. I don't understand what happened, really."
Svetlana Kuznetsova, on winning the French Open
"Here I am back in the same situation as last year. Hopefully one day I can win here."
Dinara Safina, at the awards ceremony
Was it easier or more difficult because she's your countrywoman?
"Look, two finals I won against Dementieva and Safina. It's weird. For me it's weird. I had troubles playing Dinara. But anyway, it was most important match we've played, I guess. I won it, and I'm happy for this."
Svetlana Kuznetsova
The pressure, because being the number 1, the discussion that (has) been made if you are the real number 1, is that what you feel, as well?
"I just wanted to win. I didn't win it, and now it's disappointing. But tomorrow is another day. I have in one week a tournament, so tomorrow I will be fine."
Dinara Safina
"I was in some point I was saying--I lost in Rome and I left to Moscow and my coach was not happy about it. I say, I don't want to train. I don't want to think about it. I don't want to go back to Spain. I said a few times I want to quit playing tennis. I said it. I never felt it. Definitely I would still play to enjoy, to have fun. I said it to Marat (Safin) few times. I said, 'Marat, I don't know, maybe I should not play.' He said, 'Okay, you are crazy or what? You have unbelievable opportunities. You just have to play.'"
Svetlana Kuznetsova, on a difficult time she went through last year
At what point you felt this is not going to be my day?
"I mean, once I play on the court, I always believe that I can win. Doesn't matter what's the score."
Dinara Safina
"Look, I want to move from Spain. I want to go to Russia. Everybody telling me this. I don't know what to do. He say, 'Look, you can only depend on yourself. You can control it. If you can concentrate and live in Moscow, do this. If you cannot, only you can judge, you know.'"
Svetlana Kuznetova, on advice she received from Roger Federer
Do you have explanation why you could not stay mentally tough?
"If I would know explanation, then of course I would do it on the court."
Dinara Safina

"You don't have to think about that you win before you win. So now I won, but I still trying to focus on the match because I push it so much into myself, this thought. That's why I don't smile. But maybe I have few glasses of wine, I relax, and something happens."
Svetlana Kuznetsova
Posted by Diane at 1:19 PM

yes she did it!

I knew you'd be thrilled, Dani. Sveta should have won this a long time ago. Having only one huge trophy just didn't reflect her talent.

She IS my 2nd fav player, her winning RG made me forget (temporarily) that my fav player went out in the 1st round. ;-)