Dulko performs Heimlich maneuver on herself, takes out Sharapova 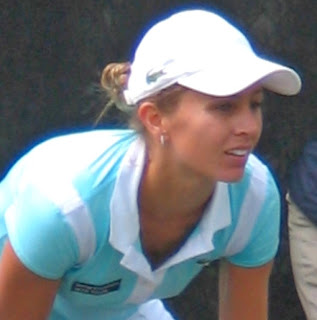 There wasn't much that Maria Sharapova--or anyone--could do about Gisela Dulko's first set in her second round Wimbledon match. Slicing, dropping, serving way out wide, and generally gliding around the court, Dulko put on a gorgeous display of tennis. I sometimes wonder why Dulko--whose small frame belies her big hitting--isn't ranked much higher than she is, and then I am reminded.

I was certainly reminded today in the middle of the second set, when she choked away a 3-0 lead. Dulko had a complete meltdown, allowing Sharapova to gain a bit of confidence. The 2004 Wimbledon champion began to look like herself again, though--at 4-3, on Sharapova's serve--Dulko forced the game to deuce. Just when it looked like the second set was still up for grabs, Sharapova held that serve, and went on to win the set.

The third set, many of us thought, might be a cruise for Sharapova, since Dulko's mind had clearly gone somewhere else. But Dulko came to life again and regained the sharpness of her game, breaking Sharapova and holding tough through five match points to win the match, 6-2, 3-6, 6-4. Once again, in that set, Sharapova--though she had her moments--was a step behind, and her shots lacked the fire we have seen from her in the past.
Posted by Diane at 9:59 AM