Paszek out in first round of Madrid qualifying 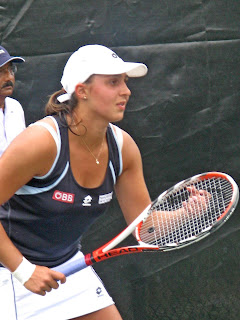 There was a time, not that long ago, when many people thought Tamira Paszek would be the next big thing. But so often, the Next Big Thing is steadily improving and quietly working her way through the rankings, unaffected by the pressure of expectation, whereas all eyes have been on Paszek.

A talented baseliner, Paszek has had her share of instability. She apparently was very attached to her coach, Larri Passos, and had to deal with interference from her father, who sent Passos away and wanted his daughter to get a different coach. My understanding is that Paszek's mother intervened, and Paszek reunited with Passos. But not for long. For whatever reason, she left him again, and is now training at the Sanchez Academy in Spain.

While she was with Passos, Paszek's ranking jumped from 365 to 35. Her current ranking is 60. Paszek won Portoroz in 2006, and made it to the round of 16 at both Wimbledon and the U.S. Open in 2007, but since then, she has been inconsistent. I saw her play Cibulkova in the second round in Charleston last month, but she hurt her hand during the match, and was unable to perform well after that.

Today, Paszek lost in the first Madrid qualifying round, to Varvara Lepchenko, who handled her easily, winning 6-1, 6-2.

Paszek is only 18, and the Sanchez Academy is a good place for her to train. I think that she will straighten out whatever is wrong and start climbing up the rankings again--I hope.
Posted by Diane at 6:13 PM