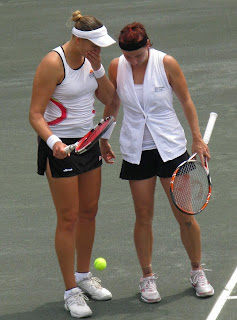 The 2nd, 4th and 5th women's doubles seeds all made exits today in the third round of the French Open. Kveta Peschke and Lisa Raymond were defeated in straight sets by Agnieszka and Urszula Radwanska, and Samantha Stosur and Rennae Stubbs were defeated by Yan Zi and Zheng Jie in close straight sets, 6-4, 7-5. And while on paper that is a big upset--Yan and Zheng are seeded 16th--in reality, it isn't. Yan and Zheng are making their way back after injury interruptions.

The upset everyone will probably talk about however, is that of Serena and Venus Williams, who--though seeded number 5--are generally considered favorites to win any tournament they enter. Bethanie Mattek-Sands and Nadia Petrova defeated the sisters 7-6, 5-7, 7-6, and the theme of this match might have been "If you can't hold your serve, at least hold your nerve." The momentum swings were overwhelming, with the three-set match producing 15 breaks of serve and a dazzling 148 winners. Service errors were often quickly followed by shots that broke opponents' serves, and the whole affair lasted three hours and nine minutes. Though not as thrilling as the Australian Open quarterfinal upset of Black and Huber, the match was nevertheless very exciting, and well worth watching.

Mattek-Sands and Petrova will play number 1 seeds Cara Black and Liezel Huber in the quarterfinals.
Posted by Diane at 11:59 AM