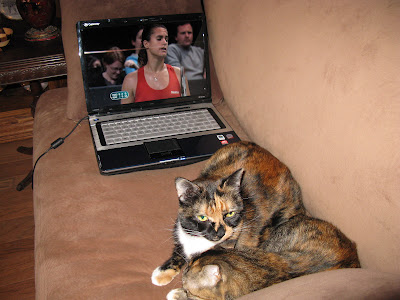 Velma and Roxie say "No worries--Amelie has this thing sewn up."

For many years, fans of Amelie Mauresmo stood by patiently as other tennis fans and members of the media called her a head case and said that she would never win a major. She won two, plus the Sony Ericsson Championships. After the illness/injury disaster of 2007, Mauresmo's fans--of whom I am a very loyal one--have stood by patiently as one tennis website not very nicely begged her to retire, and as countless tennis fans have said brutal things about her. Just this week, a reporter in Paris said that there was no media interest in her at all at the Open GDF SUEZ.

I know I join others in saying I hope that reporter--and all of Mauresmo's detractors--eat those words with a big helping of crow, on a stale croissant, and without the benefit of a fine French wine. Because Mauresmo is back, and she looks like she did in 2006. Today, she demolished Agnieska Radwanska, 6-2, 6-0, and it was a joy to see her do it. I don't mean this as anything against the Polish player, someone about whom I have written many good things. It was just such a pleasure to see Amelie being Amelie, and using that beautiful backhand to delight the French crowd.

The big question is whether Mauresmo's thigh will hold up--she has had repeated problems with it. If it does, she is in good form to cause some real damage on the tour. All we can do is hope, and send lots of positive vibes to her physio.
Posted by Diane at 2:41 PM

You said it sister.

this is wonderful news for my valentines morning. (I'm going to work in the afternoon :P)

oh Amelie, I love just how she always silence the critics with breathtaking performancces. vindication indeed.

I'm an aga fan but i was going for mauresmo
it's great to see, when her form is on, she is amazing to watch. She is similar to gasquet on the mens side, outstanding to watch when they are on form

i hope she wins this tournament
that would be the best way to signal her form is back :)

as usual I am upside down and backside foremost(as my dad used to say)......how did I miss this pic?

wonderful! and all the more so after watching her win on Sunday :)

purrs and hugs all round, except to the reporter, and all other naysayers and detractors. She's the woman!

Diane, would you mind if I put this picture on my blog(with appropriate source/accreditation, of course)?