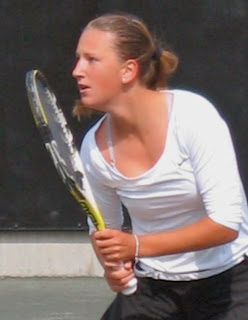 What's next for Victoria Azarenka?
Not that many years ago, all eyes were on a fifteen-year-old named Nicole Vaidisova. She could hit the ball hard and she had some talent. Many people expected great things from her, but now her name is barely mentioned; she is number 65 in the world. We were also watching the very talented Lucie Safarova, who turned out to be streakier than a kindergarten drawing, and is now number 50 in the world.

A couple of years ago, we watched some more players with great interest: Tamira Paszek, Agnieszka Radwanska and Agnes Szavay. Some of us also had our eyes on Caroline Wozniacki and Alize Cornet. Paszek has had her share of problems, and is currently ranked number 70. Szavay has been going out in the first round at most tournaments for several months now; her current ranking of 29 may soon look good if she doesn't change something soon.

The others have done better. Cornet, perhaps the most watchable of all of them, is number 11 in the world, but shows signs of significant mental weakness. She is still young, and can overcome that. If she does, I think she can have a very nice career. World number 12 Wozniacki, like Cornet, is a fiery player who has impressed many of us. She, too, should have a very nice career.

World number 10 Radwanska is a little harder to read. Radwanska is a very fine court thinker who can hit deadly accurate groundstrokes. But she tends to fold when she faces players who give her a lot of variety, such as Patty Schnyder and Amelie Mauresmo. Radwanska will have to learn how to handle these players (though--sadly--there are not many of them) if she is to improve.

That leaves Azarenka. For a time, Azarenka got into finals and lost them. She did that four times, in fact. Then she won Brisbane, and now she seems like a different player; now she has belief. Her performance at the Australian Open, unfortunately terminated by illness, was excellent. She just won Memphis, and did so by handily defeating Wozniacki.

Any of the above-named women could still break through in a big way, and it wouldn't surprise me. Players do things in their own time. But right now, the one who looks more and more like the real thing every day is Azarenka.
Posted by Diane at 9:49 PM