How do you solve a problem like Maria? No big deal for Alla... 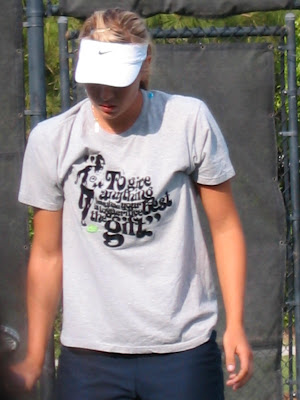 It has now been four years since Maria Sharapova won the Wimbledon championship. I had a strong feeling that she was finally going to repeat her win this year, and today, that feeling was proven to be, well...just a feeling. Sharapova went out in the second round in straight sets to the talented but inconsistent--and mostly unsuccessful--Alla Kudyravtseva. Kudryavtseva said that in her practice session, "everything worked." Conversely, the world number 2 said that it "just wasn't my day."

Kudyravtseva, who is ranked number 154 in the world, and whose highest ranking so far has been 59, saw vulnerability in Sharapova and went after it. The former champion double-faulted eight times and made more than twice as many unforced errors as her opponent, who played a very clean match. Sharapova's second serve, which used to be the best in women's tennis, failed her miserably. She was able to break Kudyravtseva only twice. Sharapova did outplay Kudyravtseva at the net, and she did hit three aces, but her good moments were too few to get her even a third set. She looked befuddled and out of sorts, and was simply not able to string together enough winning shots to take away her opponent's momentum.

Some of you may recall Kudyravtseva's performance at Wimbledon last year, when she did some deadly free swinging and went after Venus Williams' shaky forehand during a Court 2 first round match. Kudyravtseva pushed Williams to three tough sets, and--had she been just a bit more consistent with her shot-making--would have once again proven why Court 2 is called the graveyard court. This year, the young Russian was given Centre Court to show off in, but as far as Sharapova is concerned, it might just as well have been the graveyard court.

Don't miss Kudyravtseva's droll interview; pity only part of it is on video.