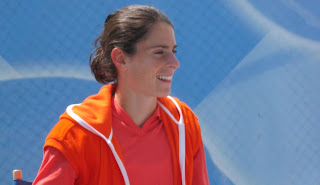 Virginia Wade called it "cruel fate" when Natalie Dechy left the court to a standing ovation. It was heart-breaking, certainly for Dechy, and for a lot of fans (myself included). The grueling second round Wimbledon battle between Dechy and number 1 seed Ana Ivanovic had a bit of everything in it. The wind was high throughout the match, though you would not have known it from Dechy's outstanding serving. Dechy held two match points in the second set, and Ivanovic saved one of them with a netcord oopsie. Should Ivanovic go on to win the tournament, this will doubtless go down as one of the most most famous Wimbledon points of all time.

In the third set, the wind blew Dechy's hat off as she struck a winning volley. The rules do state that such a point must be re-played, and the umpire ordered it thus, but there was no way Ivanovic could have gotten to the ball, even if she were on wheels. Luck-wise, it just was not Dechy's day.

The match was a huge thriller. Ivanovic broke Dechy in the 3rd set , then Dechy immediately broke her back. But at 3-4, Dechy finally had trouble with the wind and was broken again. Then Ivanovic served for the match and was broken (though, at 0-40, she saved two break points with her serve). Then the hat incident occurred. At 5-6, Dechy was at 0-30, caught up, then saved a match point at 30-40, and another one after the first deuce. She held with an ace served in high wind.

At this point, each player had saved two match points. At 7-all, Dechy held at love. Finally, at 8-9, Dechy lost her serving momentum. Saying the match turned on a dime does not even come close.
I have always admired Nathalie Dechy's elegant game. Even before her injury (which caused her to concentrate more on doubles), she was--in my opinion--one of the tour's major under-achievers. Today she showed all of that unmet potential with amazing serving, excellent volleying, clever court tactics, and nerves of steel. But even all that was not enough to defeat Ana Ivanovic, who did what she did in Paris against Jelena Jankovic--found a way to win, against all odds. Ivanovic seems to be developing a Serena Williams-type ability to play her way out of very tight corners.

Standing in the frustration line right behind Dechy is Sam Stosur, who was up 3-0 in the third set, with a point for 4-0, against Nicole Vaidisova, and lost the match.

I watched both of these matches...
the ivanovic dechy match had me on the edge of my seat, being a huge ivanovic fan i was almost dying of multiple heart attacks! however dechy played an exceptional match, the same sort of form that took her to the aus open semi in 05.

As for vaidisova stosur, i was so disappointed, as Vaidisova almost gave up in the second set, and stosur won those 9 games in a row, and i really thought it was her day, but all of a sudden vaidisova turned it on again...it was a shame.
Vaidisova actually annoyed me a bit with her childish attitude...but credit to her for coming back

The only two women on the tour of whom I am a not-fan are Ivanovic and Vaidisova. Not my day!

big big hug to Nathalie she was so brave, collected, and classy. deserved a better result!