In praise of Bethanie Mattek 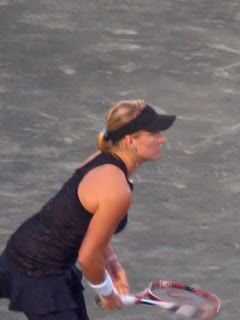 I have always enjoyed Bethanie Mattek. She has a great attitude, is most entertaining, and is her own woman. She has always had a really good serve and a pretty good game, but has not known how to use her skills to win matches. Over a year ago, she announced that she was getting a new coach (with whom she is no longer working), dismantling her game, and starting over. She said it would be at least a year before she saw any meaningful results from this change. I admired her for that because it demonstrated patience and desire. Then, after last year's U.S. Open, she disappeared for three months in order to make herself physically stronger and more agile. She did a lot of yoga and yoga-like exercises, and she came back in much better shape.

Mattek's doubles game began to improve, and--as with so many players--the better she did in doubles, the more she improved her singles skills. She and Vladimira Uhlirova won the doubles championship in Amelia Island in April.

Now, because of all this thoughtful planning and hard work, there is a new Bethanie Mattek on the tour, and her opponents may not like seeing her across the net from them. Getting to the Wimbledon round of 16 and being taken out, 6-3, 6-3 by Serena Williams amounts to having had a very fine run. The articulate and engaging Mattek has re-created herself, and it will be interesting to see how far she can go.
Posted by Diane at 4:27 PM

I'm thrilled for Bethanie Mattek. I've always enjoyed her and she had a great tournament. I hope that she has continued success on the hardcourts this summer.

Hmmm, I wonder if the new Bethanie will be as, umm, "fashion noteworthy" at the U.S. Open now that she's garnered some respect for her actual tennis game? :)

Yes, she says she's working on something for the Open. I suspect it will make a statement without going over the top.

Actually Bethanie did get a new coach. He's at the East West Bank Tournament and is responsible for her new 'grinder' mentality! He's from Orlando and a former ATP player!