Chakvetadze out, Safina in 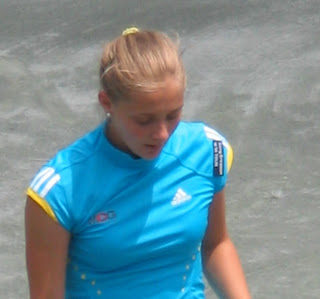 Anna Chakvetadze has not been able to get her game together since experiencing a trauma
Dinara Safina has been added to the 2008 Russian Olympic team, it was announced today. She will replace Anna Chakvetadze, who asked to be taken off the roster. Chakvetadze has not had an easy time of it since armed robbers broke into her family's house in December. They beat her father severely, and the ropes were bound so tightly around Chakvetadze's wrists that she had to receive special treatment for the pain. It goes without saying that there has also been some post-traumatic response to the event.

The other team members are Maria Sharapova, Svetlana Kuznetsova and Elena Dementieva.
Posted by Diane at 7:22 PM