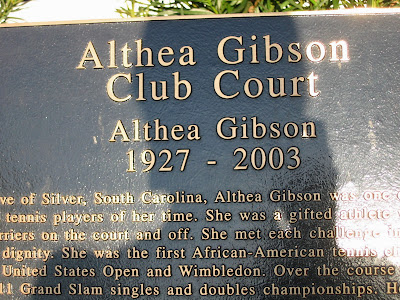 This month marks the 50th anniversary of Althea Gibson's first Wimbledon victory, marking the first time an African American person won a the English championship. She defended her title the next year, and also won the U.S. Open those two years. In both 1957 and 1958, Gibson was the first African American ever to be designated Female Athlete of the Year by the Associated Press.

Gibson was born in South Carolina and grew up in Harlem. Her career began very late by today's standards, as well as by the standards of her time, but racial segregation prevented her from playing at many clubs, and thereby halted her rise to prominence in the tennis world. A right-hander with a big serve, Gibson was considered intimidating by her opponents. After her many wins, which included 56 singles and doubles titles, she played pro gold, since there was no pro tennis available. When the open era began, she was too old to be very competitive, though she played pro for a little while.

One of the classic stories about Gibson concerns her arriving at one of her U.S. Open finals matches to see a banner hanging from the stands which read Go Back To The Cotten Plantation Nigger. Gibson turned to her opponent and said "Someone can't spell 'cotton'." (Reminds you of a recent sign, doesn't it?) When she won the Wimbledon doubles title with Englishwoman Angela Buxton in 1956, the crowd barely responded, not just because Gibson was a person of color, but because Buxton was Jewish. The two became lifelong friends.

Gibson was not vocal about race issues, and did not participate in the Civil Rights movement of the 60s. She mostly stayed head-down and concentrated on being a champion, believing that achieving high status as a sportswoman would be her best contribution to equality.

Althea Gibson was inducted into the International Tennis Hall of Fame in 1971. From 1975 to 1985, she was the State Commissioner of Athletics for the state of New Jersey. She died in 2003 at the age of 76. Gibson was the author of one book, I Always Wanted to Be Somebody, which she wrote in 1958.
Posted by Diane at 12:28 PM