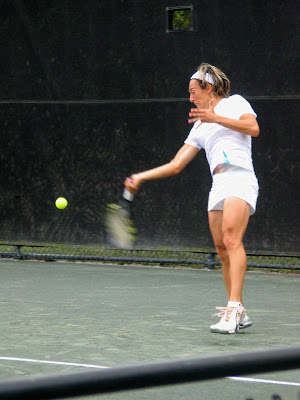 Italy's Francesa Schiavone has led her team, the defending champions, into another Fed Cup final

Team Italy, last year's Fed Cup champion, eeked its way out of a semifinal contest with France to return to the Fed Cup finals again this year. Today, Francesca Schiavone defeated France's Tatiana Golovin, 6-4, 2-6, 7-5 to even things up, 2 matches apiece. Then she went straight to the doubles court, and with partner Roberta Vinci, defeated Severine Bremond and Nathalie Dechy, 4-6, 6-1, 6-2

Schiavone, a very gifted player, has seen her career take a serious decline in the last year or so. The most talented WTA player to have never won a tournament, despite being in several finals, Schiavone tends to cave in to pressure at big moments--except during Fed Cup. At Fed Cup, she appears to thrive on pressure. During the Fed Cup semifinal, she defeated not only Golovin, but also Amelie Mauresmo.