Contrary to rumor, Mother Russia is alive and well, in the form of Vera Zvonareva. The 21st seed advanced  to the Wimbledon final today with a 3-6, 6-3, 6-2 win over Tsvetana Pironkova.

This is the first time that Zvonareva has reached the final of a major, and she achieves this pinnacle in her career after working hard to return from a serious injury. On two occasions, Zvonareva has sustained serious injuries while playing in Charleston (Obviously free of superstition, she continues to play at the Family Circle Cup, where she has twice been a finalist). The last one occurred in 2009, when she rolled her ankle and was out for months. To make matters worse, the ankle injury occurred just when Zvonareva was playing the best tennis of her career.

During the match, the commentators on ESPN talked repeatedly about Zvonareva's fragile mentality, but if they had known anything about her opponent, they would have realized that she is the one who suffers more with fragility of the mind. However, they know almost nothing about players who are not in the top 10 or from the U.S. Not to pick on ESPN, though--I didn't come across any commentators or writers who gave evidence of knowing about Pironkova's strengths and weaknesses. At any rate, Pironkova has a really fine game which I hope the juniors are watching so they can emulate it. But it is difficult for her to string victories together, and indeed, I found it amazing that she held herself together to get to the semifinals.

Playing with the guile she has shown throughout the tournament, the Bulgarian took the first set. In the second set, however, she became shaky. Zvonareva's form had something to do with that, I should hasten to add, but it wasn't surprising, under any circumstances, that Pironkova's level went down. After the first set, she never broke Zvonareva again, and the 21st seed became more confident as the match went on. 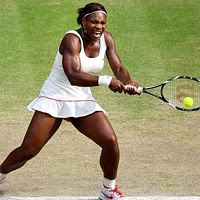 In the other semifinal, top seed Serena Williams faced Petra Kvitova, who put on quite a show in coming down from 0-4 in the third to defeat Kaia Kanepi in the quarterfinals. Kvitova kept up with Williams through the first set, and even pulled herself up from 0-4 to 3-4 in the tiebreak, but was unable to withstand the damage done by the Williams serve and by Williams' consistency. Kvitova is quite a shot-maker, but in this match, she made too many errors, most of which appeared to come out of sheer anxiety and rushing her shots. In fact, she controlled many of the rallies, only to make silly mistakes and lose the points.

Ever the showwoman--at 2-4, 30-40--Kivotova won the point of the match, a highly entertaining affair in which both players were forced to hit far out of their comfort zones. Williams, using her serve and her experience, won the match 7-6, 6-2.

Both Pironkova and Kvitova had great runs in this tournament and provided fans with some exciting tennis--Pironkova with her very tricky style, and Kvitova with her big shot-making. Both were undone not only by their opponents, but by their own nerves.
Posted by Diane at 1:06 PM

Kinda of hard on Pironkova aren't you? The broadcaster say a lot of stuff that is wacko and Zvonareva has had much bigger and more dramtic breakdowns than what you claim was Pironkova's. If Vera can get it together, than one day Pironkova can. This run should help.

From her presser today. It seems she is aware of her weaknesses and willing to work which is half the battle. Maybe this experience will change her.

Q. What will you learn from this experience?

TSVETANA PIRONKOVA: Well, that's a huge experience for me. Reaching the semifinals in Wimbledon, it's like a dream to me. Of course I wanted to go to the finals, but I guess didn't happen this year.

Q. Your ranking has now improved dramatically because of these last two weeks. You've been around the same mark before. What do you need to do now to progress further down the rankings?

TSVETANA PIRONKOVA: Yeah, there are many things that I need to improve in my game to progress more, like I need to be more consistent during the match. I need to stay aggressive all the time, and, of course, try to put my first serve more in the court.

There are many things that I should work, and I will do it with pleasure. Now I have lots of motivation, so I'll be happy to work.

"Kinda of hard on Pironkova aren't you?"

I don't think so, no. I actually enjoy her, but she has this long-term pattern that gets in the way of her advancement. Hey--I didn't even use the "c" word!

Clijsters (Zvonareva did the same thing to Clisters), Dementieva, Kusnetsov, Safina, Ivanovic are the big time "c" words. There's a number of them on the mens side also. Many players have this problem, is hers any worse. Maybe your hard on her cause enjoy her.

So she has to learn how to close out a match. Tough thing on the professional level, even though the top player make it look easy.

It is tough, and in her case, I do hope she learns because she really uses her head well in the rest of her game. I've watched Pironkova for a long time, and I would like to be able to watch her much more often.

Even worse, Petra is not a no name. She played Serena this year at the AO in the first round and even though the score was 2 and 1, it was not as easy as it looked. She is tough as she showed today.

Serena is just Serena. What a champion. Able to win a match when not every facet of her game is working. Does Vera have a chance on Saturday, yes. Will she make use of that chance, I do not know, but it will be fun to watch.

Petra took Safina out of the U.S. Open, too.

Some of these commenators are a sorry lot, aren't they? How nice it must be to get paid a lot of money to not know who the players are, to constantly mispronounce their names, and to find each other's ignorance amusing.