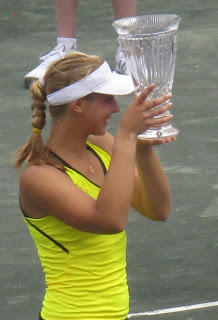 2009 Family Circle Cup champion Sabine Lisicki has entered the 2010 tournament, which will take place April 10-18 in Charleston. Lisicki, who was seeded 16th at the 2009 tournament, is the lowest seed to ever win in Charleston, though unseeded players have won twice. Lisicki was also the lowest-ranked (63) player to ever win the tournament.The 20-year-old German won the tournament without dropping a set; it was her first Sony Ericsson WTA Tour title.

Last year, Lisicki was also a quarterfinalist at Wimbledon and she went to the finals in Luxembourg. She is currently ranked number 25 in the world.
Posted by Diane at 6:21 PM