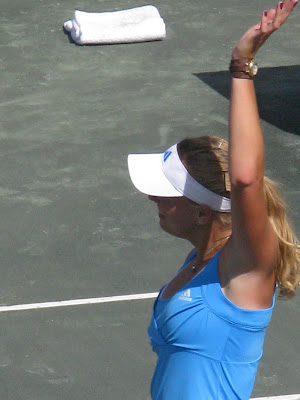 Up until today, the 2009 Family Circle Cup had produced only one true thriller--a tension-filled second round match between Patty Schnyder and Elena Vesnina. For a set and a half today, it certainly didn't look as though the semifinal between Elena Dementieva and Caroline Wozniacki was going to become the second one. But that's exactly what happened when Wozniacki tried twice to close the match, and failed both times.

The first six games of the first set went to deuce, with Wozniacki serving badly. Dementieva was so lackluster, however, and her backhand so disabled, that Wozniacki managed to go up 5-2. When she served for the set, she was broken. When Dementieva served at 3-5, 15-0, Wozniacki slid out to get a ball and fell, in just about the same spot where Vera Zvonareva took her terrible fall and where Venus Williams fell twice. She got up, wiped the clay off her body, and returned to the court, where she went up 5-4 and held at love to take the set.

In the second set, Wozniacki again went up 5-2, but when she served for the match, she was broken at love. Dementieva--suddenly showing signs of life--then saved three match points on her own serve, and held. Wozniacki then served for the match again, and was broken again, this time committing two double faults in one game. She then threw her racquet down in disgust, and wound up getting broken at love at 5-6, which gave the second set to Dementieva.

By this time, it was obvious that Wozniacki had become unraveled, and that Dementieva had turned on the winning switch we have all seen her turn on from time to time. But after having won five straight games and seeing her opponent demoralized, Dementieva did not have such an easy time of it in the next set. At 3-all, she was broken, but then broke Wozniacki back at love. At 5-all, 0-30, Dementieva returned a lob with what looked to be a stunning over-the-shoulder volley, but it went wide, and she was then broken at love, and knocked out of the semifinals.

It is difficult to fathom how Dementieva, who made such a stunning comeback in the second set, could lose so much ground in the third, especially when she had so much momentum. Credit has to go to Wozniacki, who--although she was a mental mess in the second set--put it behind her and went on to dig out a win.
Posted by Diane at 11:36 PM

I didn't know Dementieva had a sister.

Sure I do, but if Elena had a sister, she would have fallen. It was a bad spot.