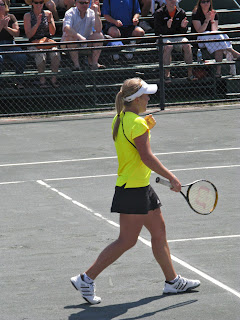 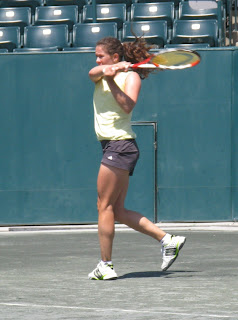 Patty Schnyder practices in the stadium
Today was cool and pleasant. We began our day by having breakfast in the hotel, just a few tables away from Vera Zvonareva and her coach, Sam Sumyk. Our main goal for the day was to watch Patty Schnyder practice, and to see the qualifying match between Anna Tatishvili and Melanie Oudin.

The Tatishvili-Oudin match was a good one, though both players struggled a bit with their serves. Oudin looks pretty good on both sides, but her forehand is formidable. She took the first set, 6-4, but went down 3-5 in the second. When Tatishvili served for the second set, Oudin broke her, then held, then broke Tatishvili at love. She then successfully served for the match.

While I was watching this match, my annual Family Circle Cup allergy broke out. Usually, it is several days into the tournament before I begin to suffer, but this year, it happened quickly. It mostly attacks my eyes, but it is very painful, and almost unbearable. We had to leave the tournament so that I could see a doctor and get some medication. Because of this distraction, we did not get to see any other matches.

We did get to see Schnyder and Zvonareva have a practice hit, however. Both looked good. I couldn't stay long, however, because of my condition.

I was already disappointed that Edina Gallovits withdrew from the tournament, thereby eliminating the team of Gallovits and Govortsova from competition. Last night, there was more bad news: Kateryna Bondarenko withdrew, which means that the sisters will not be playing doubles, either. After their two-year absence, I was so looking forward to seeing the Bondarenko sisters.
Posted by Diane at 4:19 PM