Family Circle Cup, day 4--in and around the grounds 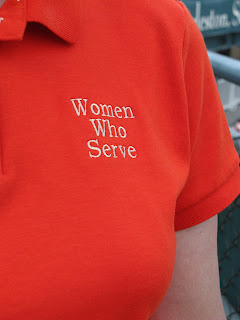 We do a bit of marketing of our own 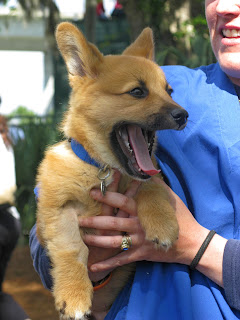 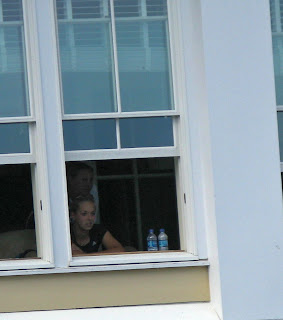 There was a lot going on at the Cup today. Dominka Cibulkova's postponed autograph session was held, and there was also an autograph session with Sabine Lisicki. A group of Special Olympics kids provided an exhibition, and--as always--Pet Helpers had a very cute canine available for adoption.

There have been a few new musical selections added to the stadium playlist this year. One of them is "Before He Cheats," but no one thought to play it for Mashona Washington.

I'm not that pleased with the food. Two years ago, the falafel disappeared. Last year, the veggie gyros disappeared, though you can still get one if you're willing to pay for the meat you didn't buy. And worst of all--this year, the vegetarian hot dogs disappeared.

Chauvinism is alive and well. Because I was cheering for Marion Bartoli in her match against Melanie Oudin, the people behind me in the stands wanted to know which Bartoli family member I was.

I got to watch part of the Petrova-Czink match from the media table. Apparently, the media didn't care enough about Nadia and Melinda to show up, so I spent some time with one of the tournament nurses in one of the best seats in the house. We were both cheering for Nadia, however, so the outcome of the match took some of the fun out of the experience.

I got that too while watching safarova vs stosur in brisbane. People around just assumed that my sister and I were related to, or friends with lucie and sitting in the wrong place. It annoyed me greatly

At least it's not just an American thing.

Tonight, there was a doubles match between a Chinese team and a team from the U.S. The crowd got into a wave and was yelling "USA! USA!"--really excited. There was a pause, then a lone voice yelled "China!"