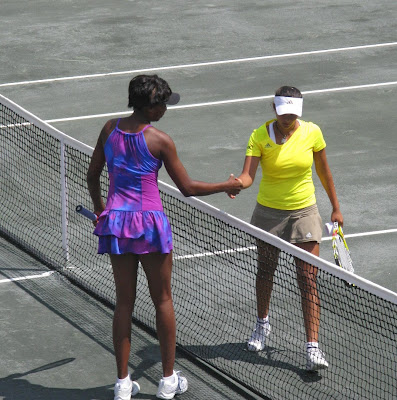 Sania Mirza shakes hands with Venus Williams, who defeated her today in Charleston 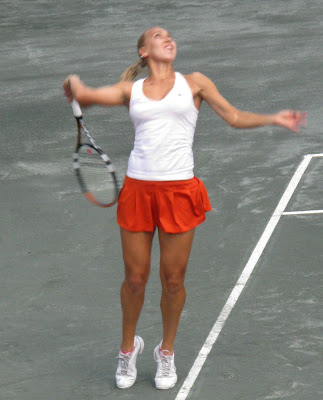 Elena Vesnina upset 8th seed Patty Schnyder in the second round of the Family Circle Cup
I began the day by watching Slovakian upstart, Lenka Wienerova, lose her match to Sabine Lisicki. I was glad for Lisicki, but I wanted to see Wienerova keep going. So did much of the crowd: There were yells of "Lenka! Lenka!" whenever she served. Lisicki--who has refined some of her hard hitting--won the first close set, 6-4. In the eighth game of the second set, Wienerova had some chances to break, but Lisicki got herself out of trouble twice by hitting two aces, and even stretched out wide to hit a one-handed backhand. Wienerova saved two match points, but Lisicki won--6-4, 6-3--on the third.

After the match, Wienerova sat alone, looking pretty disappointed. I had taken a photo of her I wanted her to sign, so I went down to have a chat with her. I reminded her that this was her first time to get to the second round of a main draw, and told her I expected to see more of her. I do--she is pretty impressive, and I thoroughly enjoyed watching her play.

While that match was going on, Alona Bondarenko's countrywoman, Victoriya Kutusova, was using a spot-on forehand to make life miserable for the 11th-seeded Bondarenko. Kutusova won, 6-4, 7-5, accomplishing one of four upsets on day 3.

When that match was over, I saw some of the match between Bethanie Mattek-Sands and Anastasia Rodionova. From the beginning, Rodionova looked sharp, and Mattek-Sands was a step behind. Rodionova took out the 12th seed in straight sets--6-2, 6-4.

By the time I got to the stadium Venus Williams had taken the first set off of Sania Mirza, 6-1, and the second set was in progress. Mirza was obviously a different player in that set, and was cracking returns left and right, eventually taking the set, 6-3, on her fourth set point. The third set was less than pleasant to watch. Mirza was the victim of a number of blatantly bad line calls, and eventually fell by the wayside. Williams fell, too--she twice landed on her rear just outside the deuce court while trying to return Mirza's serves. Williams, the 2nd seed and 2004 champion, won the match, 6-1, 3-6, 6-2.

Then came the thriller. Elena Vesnina's career has finally taken off, and it is painfully obvious this season that Patty Schnyder's is winding down. Still, Charleston is Schnyder's "home" tournament, and many of us had hopes for her.

The scoreboard stats indicate that the match lasted under two and a half hours, but for Schnyder fans, it felt like an eternity. Both players served inconsistently. Well, that's an understatement. Both players served brilliantly and terribly, sometimes within the same game. Patty won only two games in the first set, but came into the second set with a hold at love, and another hold at love at 4-all. Vesnina was smacking incredible backhand returns, but was missing a lot of approach shots. The set went to 6-all, and Schnyder won it with a tiebreak victory.

Vesnina was out of sorts in the third set, shrugging and muttering and smacking her racquet head on the ground. She began to make more unforced errors. At the same time, Patty dug herself out of 0-30 hole after 0-30 hole, and for some of us, things were looking up. At 4-5, Schndyer saved a match point, and the crowd went wild. At 5-6, she saved another one, and again--the overwhelmingly pro-Patty crowd went crazy. She needed to save one more to get to deuce, but it didn't happen. She hit a ball long, and Vesnina became the victor, with a score of 6-2, 6-7, 7-5. I don't expect to get over my disappointment for a while.

The last match I saw was the one between Caroline Wozniacki and Alla Kudryavtseva. No one held serve until the fifth game, which Wozniacki won. She got the momentum after that, and took the first set, 6-3. She also took the second set 6-3. Kudryavtseva had major problems getting decent serves in, but she should be credited for doing some very clean hitting throughout the match.

The other upset today was of 8th seed Aleksandra Wozniak, who was defeated by qualifier Melanie Oudin, 7-5, 6-0. Oudin is enjoying a real breakout in Charleston.

Other scores are available on the Sony Ericsson WTA Tour site.
Posted by Diane at 11:17 PM

I saw her in a challenger and totally underestimated her ability to win. I left one match in disgust as the opponent took the lead with the help of blatant coaching. I was so sure Oudin would lose that I later called the tournament asking them to do a better job of policing illegal coaching. To my amazement Oudin turned things around and took it in three.

Oudin strikes me as the "biggest" overachiever since Amanda Coetzer.

Oudin is on a roll. She bageled Wozniak in the second set yesterday. I got to see a little of it, but not much, because I was more interested in watching another match. I'm going to watch her play Marion this morning, though, and I'll post about it later.

Thank you very much! Look forward to reading your thoughts (though with my luck this will probably jinx her :)

I'm looking forward to seeing what happens in the next few months and in particular the French Open. Ladies tennis seems to be very wide open at the moment. I'm also hoping to be at Roland Garros for the tournament. Was there last year and I'd love to go back.

Laura--I will be at Roland Garros this year. I think on Monday and Thursday of the first week.

Diane--I was interested in the pic of Venus and Mira shaking hands. often see that opponents do not look the Williams sisters in the eye when they shake hands. I know it happens between other sets of opponents as well but particularly to them. I think it is poor form to not look up when you are shaking hands. In any other context it reads as rude. It just seems like poor sportswomanship.

n all fairness to Sania, who I think is a good sportswoman--I don't think this had anything to do with Venus. Sania had just had an entire string of points stolen from her by a couple of appalling line callers and an incompetent chair umpire. There is doubt in my mind as to who would have won this match had the line calling been even reasonably competent. I think Mirza was just in a funk.

Having said that, I agree that she should have pulled herself together and looked Venus in the eye.