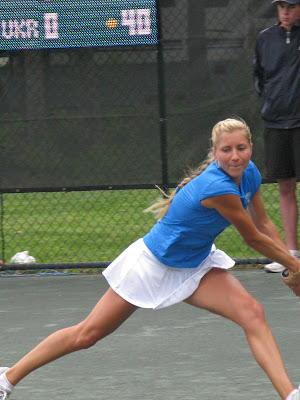 Alona Bondarenko was in good form for her first round match in Charleston today
We were able to see at least parts of several round 1 matches today in Charleston. We saw much of the Alexa Glatch-Lenka Wienerova match and the Alona Bondarenko-Anne Kremer match. Kremer played well--it is always nice to see her--but lost to Bondarenko, 6-4, 6-0. Kremer took a fall in the second set, and shrugged it off at first, but then had to have some treatment for it. She was never the same after her tumble. Bondarenko, for her part, looked good today, and displayed a lot of excellent court movement, along with a some really good reaching.

I saw part of the match between Galina Voskoboeva and Varvara Lepchenko. Voskoboeva, as usual, did a running commentary to herself--much of it negative--while Lepchenko quietly got the job done, 6-1, 6-3. I also saw a little bit of the Madison Brengle-Anastasia Rodionova match, which ended with a loss for Brengle.

Olga Savchuk had the misfortune of having her back go out on her during her match against Melanie Oudin. She had to have treatment more than once, and she carried on, coming back to life from time to time. She was in too much pain, however, to do much damage after the first set, which she lost 4-6. She failed to win any games in the second set. During that second set, Oudin looked so awkward serving that I suspected she, too, had sustained some sort of injury. It was hard to tell what was going on; she was getting her serves in, but she was putting hardly anything into them. Once again, however, her forehand was on fine display throughout the match.

Tamira Paszek defeated Julia Schruff 7-5, 6-2. She was uninspired in the first set, though she cleaned up her game in the second. Paszek had problems with her serve throughout the match, but also managed to break Schruff six times. Shruff had two opponents, in that she argued with the chair umpire a good deal of the time. Paszek, by the way, is now training at the Sanchez Academy in Spain; Angel Giminez is coaching her in Charleston.

It rained a little during the day's final match between Jill Craybas and Melinda Czink, but not quite enough to stop play. Czink ate most of Craybas's second serves and broke her four times, finally defeating her, 6-2, 6-4. It should be noted, however, that Craybas made some crack shots throughout the match, which included some high-quality play from both women. It was a better match than one might expect in somewhat windy and rainy conditions.
Posted by Diane at 9:09 PM