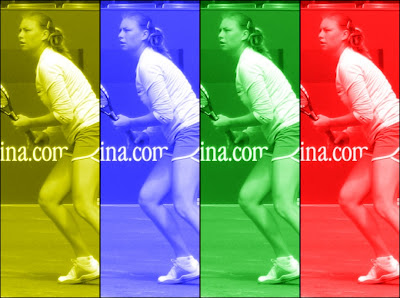 Because my Fox Sports Network affiliate chose not to show the final (thanks again, Sony Ericsson WTA Tour), and because Tennis TV had a breakdown and stopped broadcasting today (thanks, Tennis TV), I was not able to watch defending champion Ana Ivanovic and Vera Zvonareva play for the BNP Paribas Open championship. I will, however, be able to watch it later, which isn't much fun, but it's better than nothing.

I was at least able to keep up via the scoreboard, though, and to follow Zvonareva's strange and ever-changing service stats. It was obvious that her second serve saved her, though her first became better later in the match. The obvious reason for many of the service problems of both players was the strong wind that was blowing throughout the match. In the end, Zvonareva appeared to have handled the conditions better.

For some of us who have believed in Zvonareva for a very long time, this is a day we knew would arrive. She had a very tough opponent and tough conditions, but she prevailed. She prevailed twice, in fact, having won the doubles championship yesterday with partner Victoria Azarenka.

Aww, it's too bad you didn't see it live. It would have been interesting to see if you had the same sense of dread for Zvonareva that I did when she smashed and broke her racket after getting broken by Ivanovic... in the second game of the match.

I know I was preparing the epitaph at that moment.

Apparently, though, she got it out of her system early. Maybe she should do it every match rather than let things build up over a couple of sets. :D

I got to see most of it later. I believe Vera when she says that all of her anger is external now, and that inside, she remains calm. I think she gets it out and moves on.