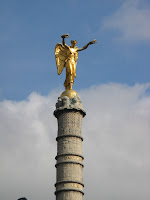 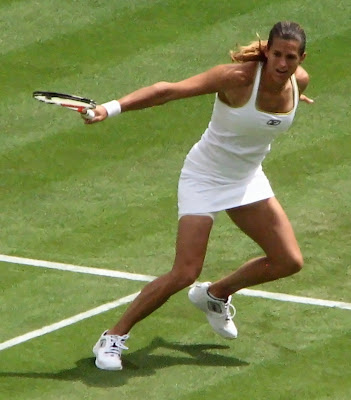 Amelie Mauresmo, the woman with the most beautiful game on the Sony Ericsson WTA Tour, had not won a tournament since Antwerp in 2007. Plagued with appendicitis, a post-surgical abdominal strain, several episodes of thigh strain, and a massive loss of confidence, the Frenchwoman was written off by many. But today, in her beloved Paris, she showed once again why she has so often been called "champion."

She could not have had a more formidable opponent. Elena Dementieva's extreme athleticism was on display (these are two of the top four or five athletes on the tour), and the two players gave the Paris crowd plenty

Photo courtesy of After Atalanta

of thrills with their beautiful shot-making. The first half of the first set was nothing but breaks of serve, but then Dementieva held. Her lead was brief, however, as Mauresmo brought the set to 5-all. She then won a tight tiebreak, 8-6.

Dementieva dominated Mauresmo in the second set, and won it, 6-2. In the third set, Mauresmo's confidence, serve and concentration returned, and--though she had to serve for the match twice--she won it 6-4. Mauresmo repeatedly used her backhand slice to throw Dementieva off balance, and--despite some rough patches--also used her serve to set up winning volleys. This was vintage Mauresmo--backhand slice, net rushes, lots of variety. Her forehand was looking pretty good, too.

Mauresmo wept when she won the match--her third Paris victory--as one would expect. Having been counted out over and over, she had much to prove, and she proved it. The season is just beginning...allez!
Posted by Diane at 11:44 AM

This was a fantastic turn of events for Mauresmo, I hope the rest of the year is just as good for her. Allez Momo!

There is hope for momofans yet. Finally after the last two years, those who call for her to retire can shut their trap now!