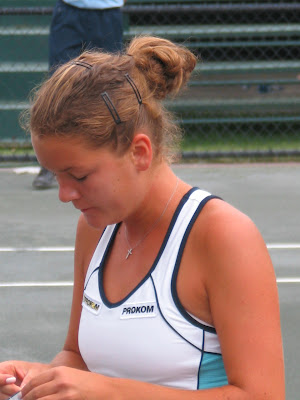 Holding her nerve after blowing three match points in a second set tiebreak, Agnieszka Radwanska broke Nadia Petrova at 4-all in the third set to serve for the match. On her fifth championship point, she won the International Women's Open, 6-4, 6-7, 6-4, giving her a 4-0 record in finals.

This was a very entertaining match with some thrilling rallies. Petrova hit a lot of winners and also made a lot of unforced errors. Radwanska came through on the big points, however, and toward the end--when she could have done something to turn things around--Petrova lost her focus.

The International Women's Open, a Tier II event, is the biggest win of Radwanska's career.
Posted by Diane at 3:13 PM