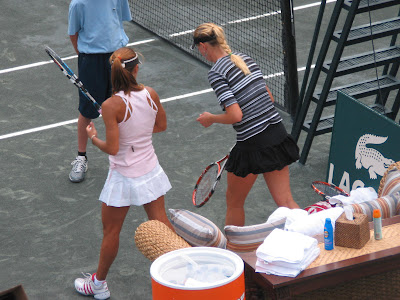 The entertaining team of Gallovits and Govortsova heads to the court

I was worried, after Charleston, that Edina Gallovits and Olga Govortsova had decided not to play doubles together anymore, but here they are--reunited--in the Wimbledon draw. Their accidental and spontaneous teaming up at the Family Circle Cup was a real plus for fans. Gallovits and Govortsova played exceptionally well and wound up in the final. On their way there, they took out both Black and Huber and Peschke and Stubbs.

Gallovits and Govortsova play Sofia Arvidsson and Barbora Zahlavova Strycova in the first round.
Posted by Diane at 7:22 PM